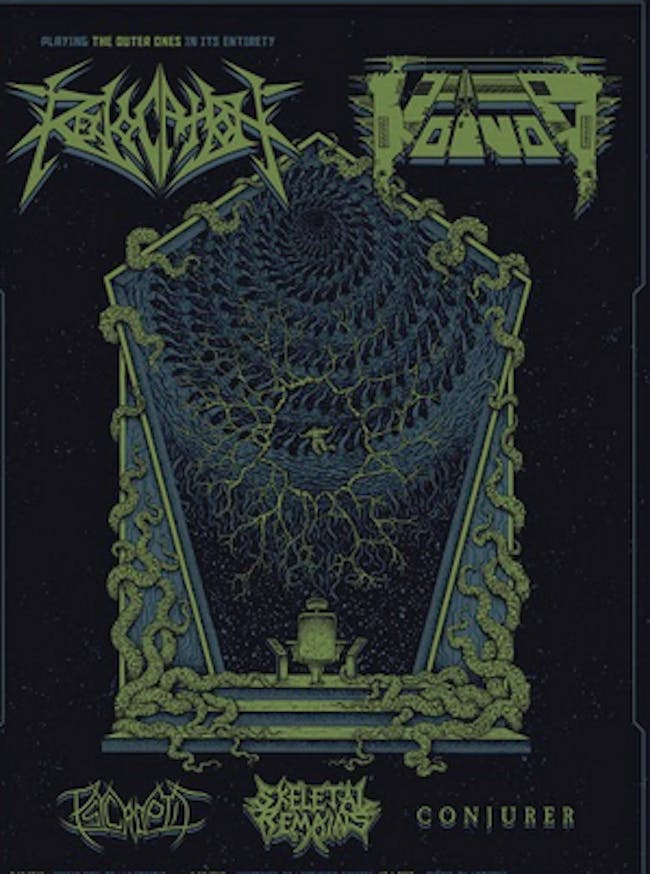 No sooner was ‘Empire…’ released than Relapse Records was calling, and the band was signed in early 2009. By spring the band was studio-ready once again, and entered Damage with Rutcho to record ‘Existence is Futile’, their Relapse debut.

2010 saw Revocation add touring guitarist Dan Gargiuolo, and the newly-expanded band hit the international tour trail hard. Revocation logged miles in Japan supporting Behemoth, Europe supporting Dying Fetus, and the US and Canada playing alongside the likes of the The Black Dahlia Murder, Whitechapel, Misery Index, Veil of Maya, and many more. All in all, the band covered 13 countries with over 150 shows.

Their latest full length, 'Chaos of Forms' was released in 2011.

Founding members Jean-Yves "Blacky" Thériault (bass) and Denis "Snake" Bélanger (vocals) departed the band in the early 1990s (though Bélanger would return and leave the band several times until the mid 1990s), guitarist Denis "Piggy" D'Amour and drummer Michel "Away" Langevin forged ahead with new member Eric "E-Force" Forrest on bass and vocals. Forrest departed in 2001 and Voïvod went on hiatus for a year. The band reformed in 2002 with Denis "Snake" Bélanger returning on vocals and ex-Metallica member Jason "Jasonic" Newsted performing bass duties in the studio.

Voïvod found itself on hiatus once more as guitarist Denis "Piggy" D'Amour was diagnosed with cancer of the colon, he passed away in 2005.

In 2009 the band released its twelfth studio album Infini, which features the last music written and recorded by D'Amour.

Currently, Voïvod continues to perform live with its remaining original members; Denis Bélanger, Michel Langevin and Jean-Yves Thériault and the new guitarist Dan Mongrain. In January 2013 a new album called "Target Earth" will be published by Century Media. It was announced that Jean-Yves Thériault was forced out of the band, for months he requested meetings regarding the band business and artistic affairs, but was denied such talks by the other members

Death metal band from California, US.