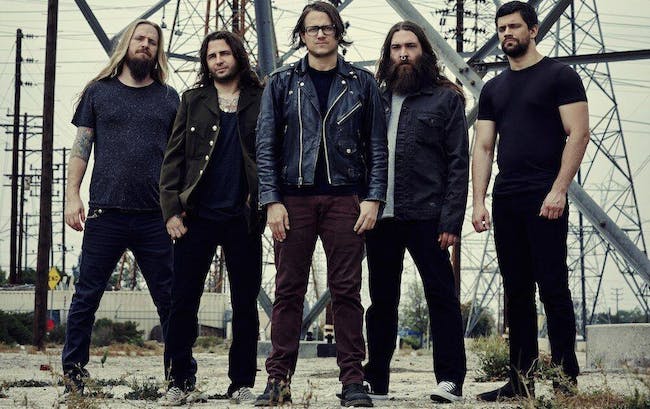 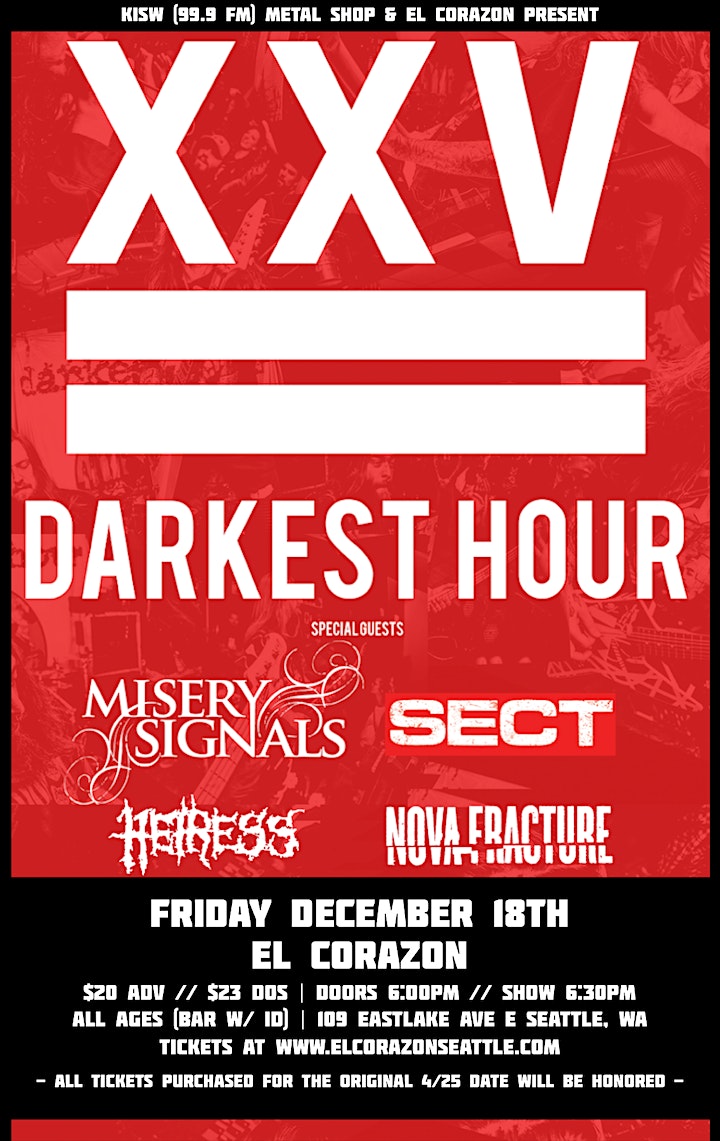 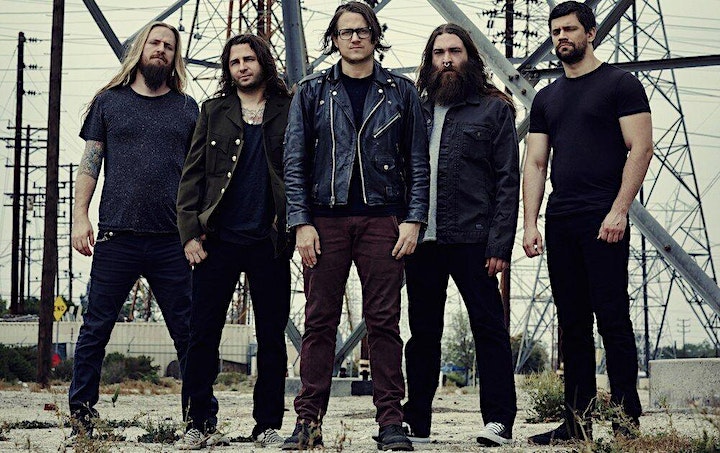 The most effective, connective and inspired creative expression often comes from those who’ve abandoned all aspirations beyond the art for the art’s sake. At a time when the vast majority of the so-called “scene” is obsessed with careerist goals, popularity and time-tested formulas, Misery Signals have reemerged from self-imposed hibernation to once again remake the rules and reassert the inherent power of true passion. A decade since their initial formation, the Midwestern musical collective remains driven by determination, resilience and the urgent need to share their work with their enduringly diehard supporters.

Equal parts raw punk-rock spirit and skillfully adept heavy metal precision, the Misery Signals sound continues to stand apart from the pack on their first full-length album in over five years, the jarringly dynamic Absent Light. Hearkening back to the DIY hardcore ethos the band members grew up with, the new album was financed by Misery Signals fans via crowd-funding service Indiegogo. Longtime listeners and curious newcomers alike displayed their anticipation for new Misery Signals music by more than doubling the band’s funding goal online.

Misery Signals is the type of group who inspires questions about time signatures and musical gear rather than hairstyles or love lives. Their combination of progressive, technical and atmospheric riffage with melodic prowess, impassioned frenzy and unhinged rock n’ roll edge helped define part of the New Wave Of American Heavy Metal, a subgenre that includes the commercially successful likes of All That Remains, Killswitch Engage and Lamb Of God. The transcendent experimentalism of Deftones, the mind-bending pulse of Meshuggah, the power of seminal Metalcore masters Shai Hulud and the adventurously dynamic engagement of “thinking man’s metal” band Cave In all exist within the unique blueprint Misery Signals have pioneered for themselves.

The fact that Misery Signals has thrived on tours with peers ranging from Between The Buried And Me and The Dillinger Escape Plan to Norma Jean and Emmure speaks volumes as to the band’s singularly broad appeal. Leaders and not followers, innovators and not imitators, Misery Signals have built a catalog of stunningly complete sounding albums, including Controller (2008), Mirrors (2006) and Of Malice and the Magnum Heart (2004). After 11 years, Misery Signals retains three of its founding members: Ryan Morgan on guitar, his brother Branden on drums, and newly returned bassist Kyle Johnson. Gregory Thomas adds guitar-playing skill to the band’s stew, which sits confidently behind the urgent vocals of Karl Schubach, who took on the frontman position in 2006.

The prolific members of Misery Signals stayed active even while separated by geography and the peaks and valleys of life outside the band. Karl dabbled with a super heavy solo project, Solace. Ryan and Kyle co-founded crusty hardcore throwback Burning Empires together with members of Fall Out Boy and 7 Angels 7 Plagues. Branden hooked up with guys from The Receiving End of Sirens and Motion City Soundtrack to form the female-fronted The Company We Keep, and stepped in as touring drummer for Emarosa.

Absent Light launches with the phrase “I’m not ready to say goodbye” in the album’s first track, “A Glimmer of Hope.” Clearly, fan feeling was very mutual. “Shadows and Depth” is triumphant as it declares, “We are the torchbearers!” The symbolism on Absent Light is thick and rich, from the trenches of war to the taste of ashes, burned out gaslights to the bewilderment of regret and closure.

The recurring theme of the reinvigorated band’s first album together in five years is one of losing your way with an object of attachment perhaps only to find center again. Buoyed by a real-life 40-string ensemble with real instruments (the Morgans’ father has spent decades with the Madison Symphony Orchestra) and even more exotic musical tools throughout, Absent Light retains the cinematic-sounding ambition that saw Revolver once compare Misery Signals to Sigur Rós.

Shredding musicianship has been popularized within the scene in the years since Controller, but Absent Light serves as a firm reminder that more musically driven, song-oriented compositions will always better showcase the “shred” factor than mindless showmanship. A largely self-produced effort mixed by trailblazing studio maestro Steve Evetts (The Cure, Glassjaw, Sepultura), Misery Signal’s return wasn’t bound by creative limitations, label pressure or outside expectation. And the overwhelming excitement about the compellingly participatory packages of the Indiegogo campaign helped inspire the quintet as they created together.

Misery Signals still delivers their boundary pushing music and live performances across the world, with a new commitment to touring with their main project shared by all of the members of the band. True torchbearers indeed, Misery Signals continues to fly the flags for authenticity, audience/band communal experience, old-school DIY ethics and impressively unwavering artistic bravery. 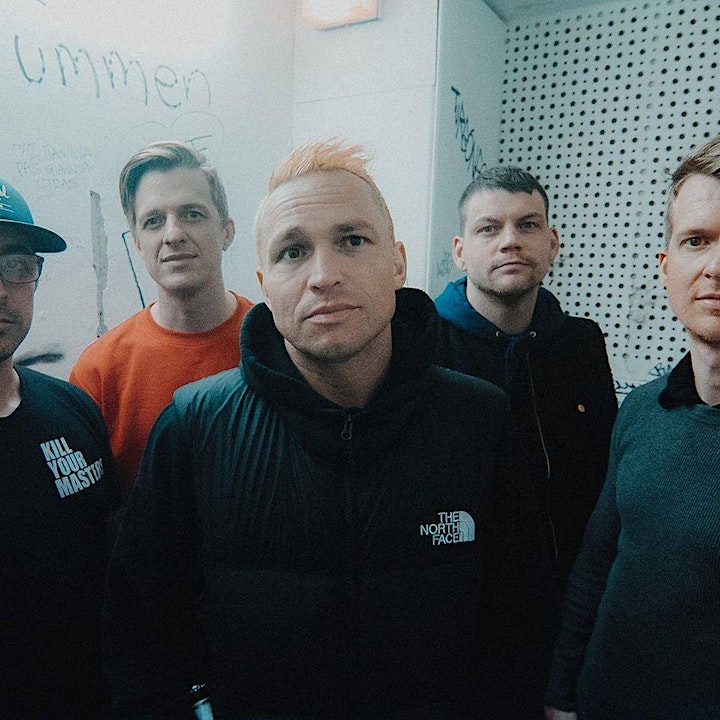 With two countries and four hometowns between them, Sect was born when two project ideas between tour mates merged into the same experiment, finally taking shape in 2015 and culminating in recording sessions in Raleigh NC in early 2016. Sect is comprised of five veterans of ‘90s hardcore who cut their teeth in that formative moment of political, cynical, antagonistic extremes. They each went on to put in their time in bands spanning all corners of the hardcore and xvx worlds, though they’d rather skip the ex-members talk entirely and get right down to the blast beats and breakdowns that fight it out in their chaotic jams - aka cut the shit and go for the throat. Because the Orwellian police states and irreparable social and ecological disasters we once saw off on the horizon are now on our front doorsteps, in full swing - and in just such a volatile, precarious moment as this for civilization, there is more reason than ever to keep lashing out at a world more suicidally bent on its own destruction and the exploitation of people, species and the ecosystem itself, than perhaps ever before in history. For Sect, this is the purpose of hardcore as they know it, conveying an urgency that transcends age, credentials or scene politics, to convert desperation into real talk and action. 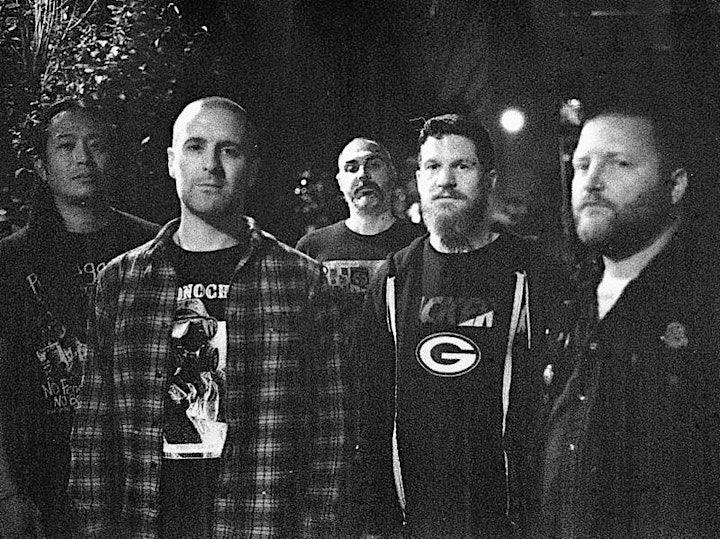 "Following their critically acclaimed full lengths Early Frost (2013, Deathwish Inc.) and Of Great Sorrow (2015, The Mylene Sheath), Seattle, WA’s Heiress land the knockout blow with highly anticipated follow-up, Made Wrong. The album consists of 7 jarring tracks that are all at once their most explorative, experimental, and intense yet. Vocalist John Pettibone (former Himsa & Undertow frontman) sounds more maniacal than ever, offering up his trademark, madman intensity in fine form throughout the maelstrom. The bands sound has become even harder to classify, mixing elements of hardcore, metal, post-metal, post-rock and doom into a vehement cocktail of tension and release.

For those uninitiated, Heiress is an American rock band from Seattle, WA featuring former members of Himsa, Undertow, Jough Dawn Baker and Sharks Keep Moving. They formed in Seattle, WA in 2006 originally with vocalist Adam Paysse, the co-founder of Rome Plow Records. Then in December 2008 Pettibone took over Paysse’s place as lead vocalist. With this lineup, Heiress recorded a five-song self-titled EP and self-released it in 2009. Soon after, in 2010, the band signed to Deathwish Inc., an independent hardcore record label that was co-founded by Jacob Bannon of Converge. The group’s first release through the label was a split 7" with Narrows. In mid-2011, legendary producer Jack Endino (Nirvana, Mudhoney, Soundgraden) produced and engineered new Heiress tracks at Soundhouse Studios. Endino also remixed two previously recorded Heiress songs which were released as the Naysayer EP in 2012. The single featured artwork by Demian Johnston, who previously played with Pettibone in Undertow and Nineironspitfire, and was positively received by Alternative Press (4/5). Ten of the remaining tracks from this session became Heiress’ full-length debut album titled Early Frost, released by Deathwish Inc. in early 2013 and received an 8/10 rating from Decibel Magazine.

The band then signed with The Mylene Sheath, and on February 10th, 2015, released their sophomore full length Of Great Sorrow, recorded with Tad Doyle at Witch Ape Studio (YOB, Lesbian, TAD). The album was mastered by Chris Hanzsek (Soundgarden, Melvins, Screaming Trees) with artwork once again handled by Demian Johnston. The vinyl quickly sold out during the pre-order for the album and the band went on to play a series of shows with XTRMST, a side project of AFI’s Davey Havok & Jade Puget. The album was well received by press outlets such as Noisey and Decibel Magazine. Metal Sucks went on to say “Of Great Sorrow is the kind of record for which the use of the verb “crushing” as an adjective was invented”. Even as the album was being released and promoted, the band was hard at work on its eventual follow-up, and their third full length, which brings us to the present.

Heiress now unleash “Made Wrong”. Recorded with iconic producer Matt Bayles (Mastodon, ISIS, Botch, Pearl Jam), and once again mastered by Chris Hanzsek, the album showcases a progression into darker, more experimental tendencies, while somehow managing to be heavier than anything the band has done to date. Artwork this time around was handled by Chet and Rachel Scott for Glass Throat Visions (who also did the artwork for Early Frost), and is scheduled for a March 18th, 2016 release date, once again through The Mylene Sheath.” 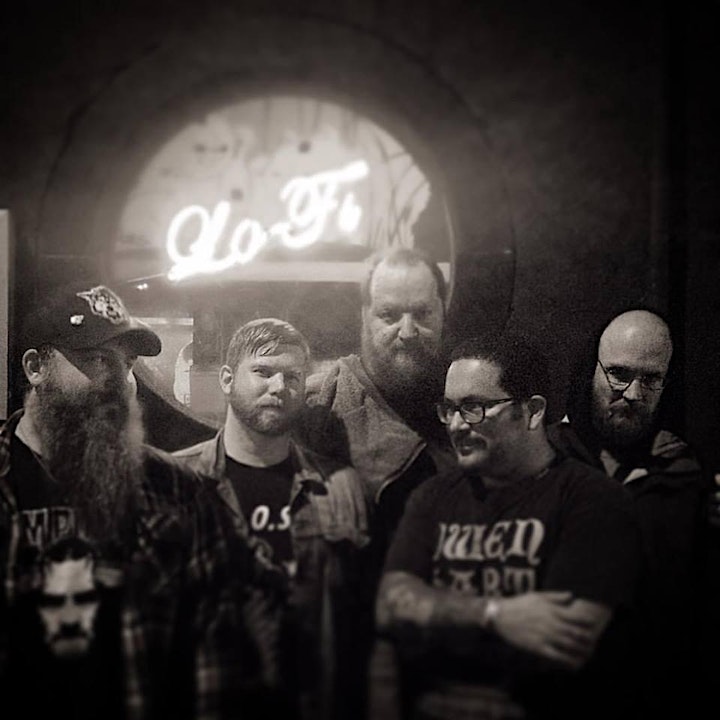 Nova Fracture is a five-piece Metalcore band from Seattle, Washington consisting of vocalist Nick Oswald, guitarists Austin Grey and Nick Bragg, bassist Traian Manolescu and drummer Derek Eddins. The band was founded in January 2019 going through many shifts in the process until they found their footing towards October 2019. Nova Fracture's influences with their music creativity are bands such as As I Lay Dying, Underoath, Trivium, Architects, August Burns Red, Bring Me The Horizon, and The Devil Wears Prada.“ 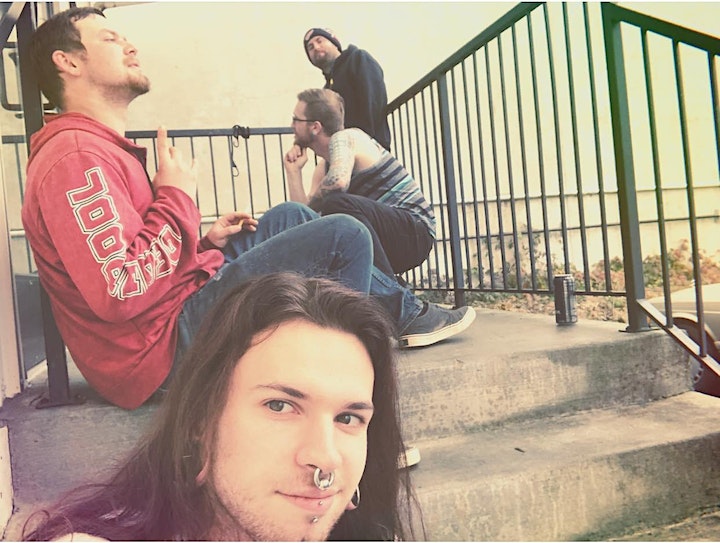