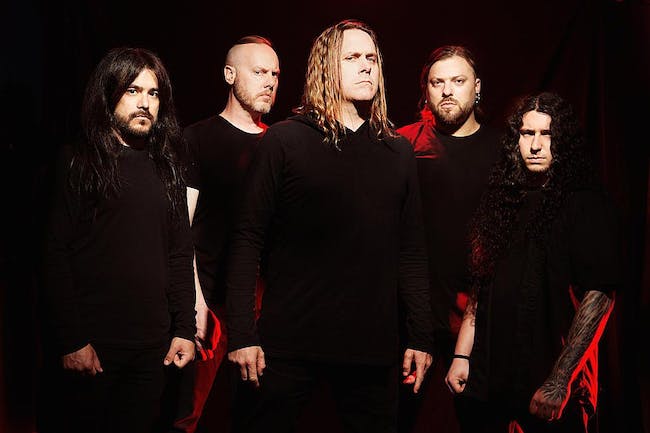 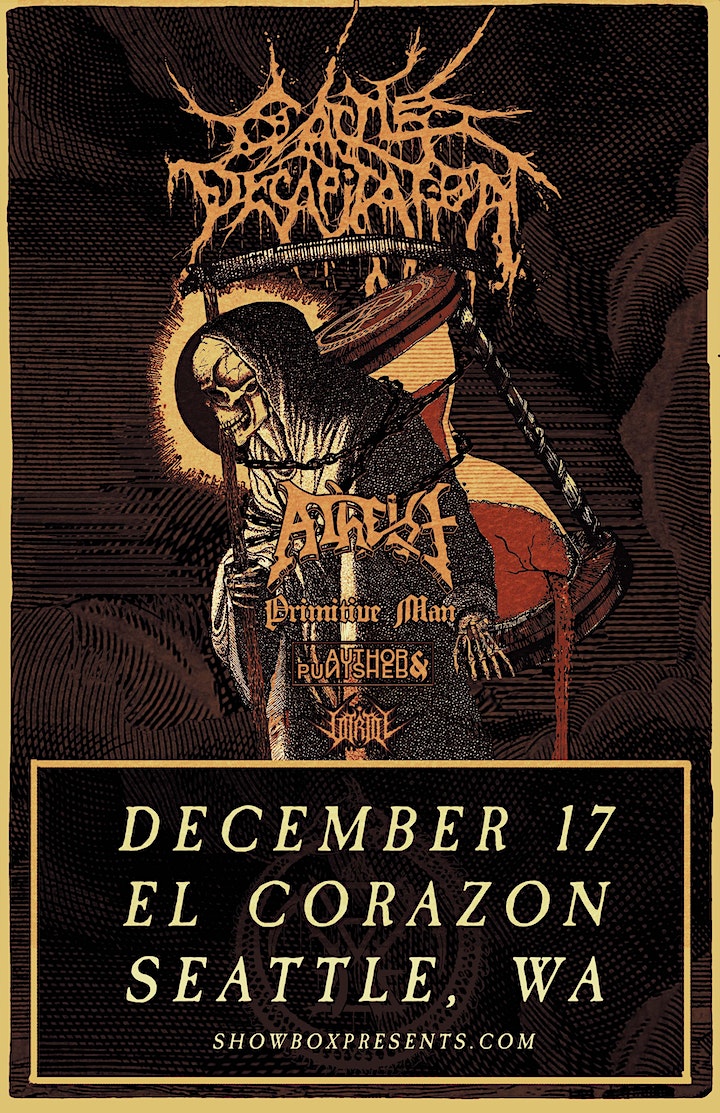 Compromise is not a concept Cattle Decapitation are willing to entertain. Ever. Over the course of nineteen years and six full-lengths the San Diego quartet have more than proven this, defining themselves as one of the most vital, brutal, and relentless forces in extreme music, and with The Anthropocene Extinction they have delivered a volatile, apocalyptic beast that is as hideous as it is compelling. "I feel that something rare happens with our band in that we get better and better with each release rather than going in the opposite direction, which happens to a lot of bands," states vocalist Travis Ryan. "As we get older we feel we have less and less to lose, which is freeing, and we really want to go as far out on a limb as we can without losing the extremity that has always driven us."

With 2012's Monolith Of Inhumanity Ryan, guitarist Josh Elmore, bassist Derek Engemann and drummer Dave McGraw delivered a sledgehammer blow, maintaining their position at the most violent end of the death metal spectrum yet expanding their sound, allowing a little more melody in without losing any of their intensity. As always tied together by a central concept, Ryan's bleak lyrics bluntly illustrated the fate of the human race if allowed to continue pillaging and destroying the planet. With The Anthropocene Extinction he extrapolates on this subject, looking back at the world in the aftermath of such ecological and environmental devastation, with its focus largely centered on the Pacific Ocean. "The Anthropocene Era is the time period where humankind has had the most profound negative effect on the Earth and its ecosystems and the record focuses on how we have managed to bring that era to an end. From even before the Industrial Revolution and into the present day, humankind's inexhaustible need for resources and explosive population growth have accelerated us towards a future world where we will have either consumed or polluted ourselves out of existence. When you look to the oceans the footprint we have left comes in the form of all the junk and plastic that has made it out there because we let that happen, and the effect that has, because when you start breaking down eco-systems it's a domino effect and will one day end up doing us in. The Anthropocene Extinction is set in the world that we destroyed, and lyrically, it's certainly the most depressing record I've written."

Of course, rather than taking such themes and applying them to introspective, navel-gazing music they weld them onto a soundtrack of all out savagery. Dominated by their blistering death-grind attack, shades of caustic black metal seep in across the record, and they further expand on the more epic and melodic aspects of its predecessor, at the same time making for a far more cohesive listening experience. "We've never actively said "let's do a black metal part" or "let's do a brutal blastbeat part!" We base everything on feeling, but we definitely focused much more on fluidity within the songs and making the record flow much more than on some of our earlier releases." With doom drenched opener "Manufactured Extinct" they set the scene, the monstrous "Clandestine Ways (Krokodil Rot)" - which turns the tables on the vivisectionists working in the cosmetic industry - and "Not Suitable For Life" perhaps the most intense and violent music the band have yet put their name to. Alongside these sit brooding instrumental "The Burden Of Seven Billion" and the melancholic "Ave Exitium", and across the record Ryan's mutated, high pitched melodic shriek - which could never be mistaken for 'clean' vocals - gets more space to breathe. This provides The Anthropocene Extinction with its catchiest parts, though dispensed sparingly and never forced, taking "Mammals In Babylon", "Apex Blasphemy" and closer "Pacific Grim" into somewhat tragic, desperate territory. "I think we came out with something pretty damn catchy, which I know isn't a common trait of this kind of music, but then again we're not trying to be like everybody else, or anybody else. When you have four drastically different opinions in a band that's where I think actual magic happens. We're all into very different things, and sometimes that can lead to conflicts, sometimes that can lead to greatness."

Reenlisting Monolith Of Inhumanity producer Dave Otero (Allegaeon, Cephalic Carnage), the band returned to Flatline Audio in Denver, CO, eager to revisit the close collaboration that helped bring that record to life. "Dave is a bonafide producer, he's got a lot of great ideas and this time we heard him out pretty religiously because making Monolith had worked out so well. We've always kind of co-produced our records with whoever we brought in, but these last two we did a lot more listening to what he had to say rather than just sticking with what we were saying. Sometimes we shot down his ideas and vice versa, but that discussion was always beneficial. He basically becomes the fifth member of the band at that point, and I think that kind of relationship is the best way to get anything out of anybody." The Anthropocene Extinction also features contributions from some notable guests, with Tristan Shone (AKA Author & Punisher) contributing to "Plagueborne", Bethlehem's Jürgen Bartsch providing a spoken word part - in his native German tongue - for "Pacific Grim", and Phil Anselmo lends his sandblasted larynx to "The Prophets Of Loss". "We originally didn't plan on having any guest appearances, but when the opportunities presented themselves while we were in the studio, they just seemed to fit perfectly and it was great we were able to actually get them involved."

The Anthropocene Extinction also sees the band extending their collaboration with Wes Benscoter, who has handled the artwork for every release since 2002's To Serve Man. "As with the case of Dave Otero, when we work with Wes he becomes a member of the band, and this also applies to Mitch Massie [who directed the notoriously NSFW video clip for Monolith Of Inhumanity's "Forced Gender Reassignment"]. I care about their opinions just as much as my own, and it's about putting the ball in the court of these guys as much as possible without sacrificing our artistic integrity." As usual, Benscoter formulated striking imagery that conveyed the record's themes in unflinching style, the cover featuring a bloated and distorted corpse washed up on a beach, its torn abdomen disgorging a mass of waste plastic. "It harkens back to what's going on with the albatrosses they have been finding on Midway Island for years. They're mistaking plastic for krill, ingesting this and dropping dead on the island, and as they decay the plastic inside them spills out. It paints a vivid picture of what's going on out there, and we're taking that and putting that within a human context, because, as I said before, it's a domino effect that ultimately leads back to our own downfall." 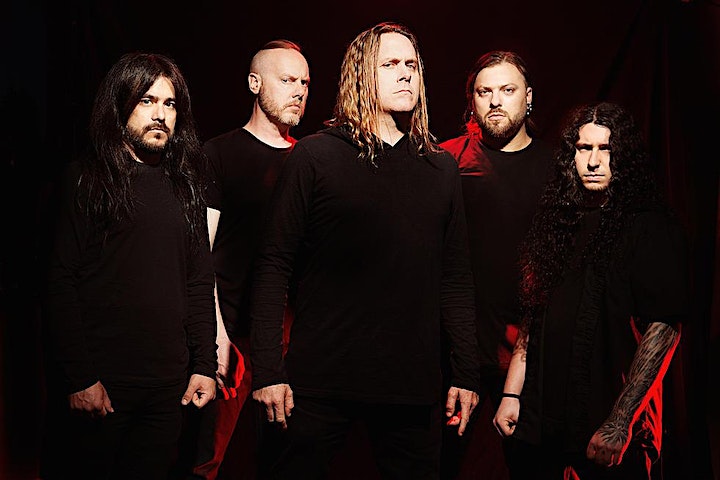 Atheist is a death metal band from Florida, founded in 1984 by vocalist/guitarist Kelly Shaefer, guitarist Rand Burkey, bassist Roger Patterson, and drummer Steve Flynn. The band is known for their highly technical playing style, and their 1991 album Unquestionable Presence is regarded as an important landmark of the technical death metal genre. After disbanding in 1994, the band reformed in 2006 and have since released one studio album and a live DVD 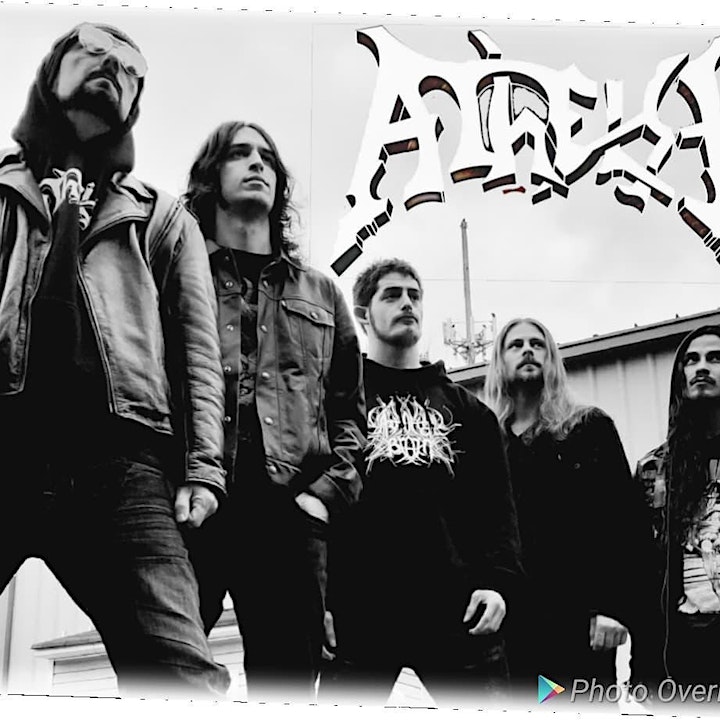 Denver’s PRIMITIVE MAN’s music matches its name: a savage, sparse mix of death metal, blackened noise, and doom riffs. The threepiece was formed in February of 2012 by Ethan Lee McCarthy, Jonathan Campos, and Bennet Kennedy (all current and former members of Vermin Womb, Withered, Clinging To The Trees of A Forest Fire, Death of Self and Reproacher). In October of 2012 the band recorded their debut LP Scorn at Flatline Audio with Dave Otero (Cephalic Carnage, Cobalt, Catheter, CTTTOAFF). Scorn was released a collaboration between Throatruiner and Mordgrimm Records. After the release of Scorn, the band parted ways with Kennedy and recruited Isidro "Spy" Soto to temporarily take over on drums for a number of tours/releases before settling on a permanent replacement in drummer Joe Linden in 2015. The band also self-released a three-song EP in February titled P/M.

The unique metal hybridization of Scorn caught the attention of Relapse, who liked the record enough to sign the band and reissue the full-length in summer 2013. Dubbed a "totally malignant sounding record and one that will consume you whole if you’re not careful,” by Cvlt Nation and called “the best worst thing that has ever happened to you,” in an 8/10 review from Metal Hammer, Scorn found PRIMITIVE MAN celebrating a slow-roasted apocalypse through seven suffocating hymns of hatred, disease and sonic deviance. The record put the band on the map for many listeners, and enabled PRIMITIVE MAN to embark on a relentless touring schedule that would soon see the band playing live shows across the US and Europe (often for the vast majority of the year) in company with acts such as Magrudergrind, Weekend Nachos, Hexis, Reproacher, Fister, Celeste, Opium Lord, and Northless. PRIMITIVE MAN also played Denver Black Sky in 2013 alongside Relapse brethren Dying Fetus, Exhumed, Skinless, Iron Reagan, Mammoth grinder, Call of the Void, and Weekend Nachos.

All of Ethan McCarthy’s projects have been prolific, and PRIMITIVE MAN is no exception – the band released four splits between 2013 and 2015, and dropped another bombshell of nihility in 2015 with its Relapse EP Home Is Where The Hatred Is. The EP was well-received by publications including Metal Injection, MetalSucks, Revolver, and Exclaim!, the latter of who stated, “unapologetically bleak and permeated by loathing and hostility, Home Is Where The Hatred Is will either leave you wanting more or contemplating teetering off a ledge.” Despite their primeval, bludgeoning approach, PRIMITIVE MAN wouldn’t exist without their savage awareness of modern humanity: simultaneously old and new, atavistic and groundbreaking, PRIMITIVE MAN stands to redefine current conceptions of hope, faith, and metal music. 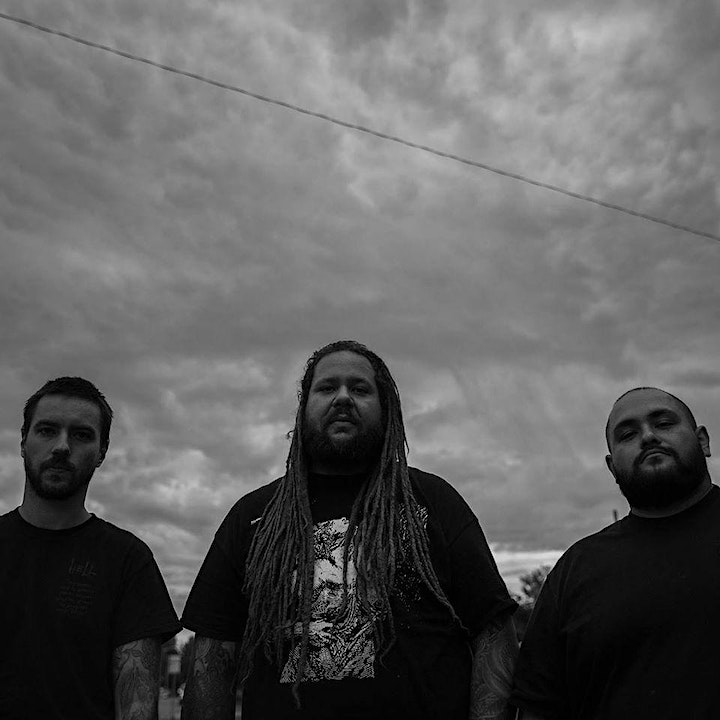 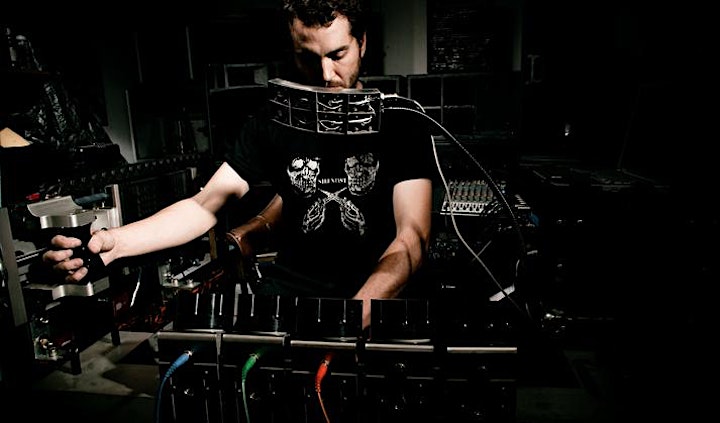 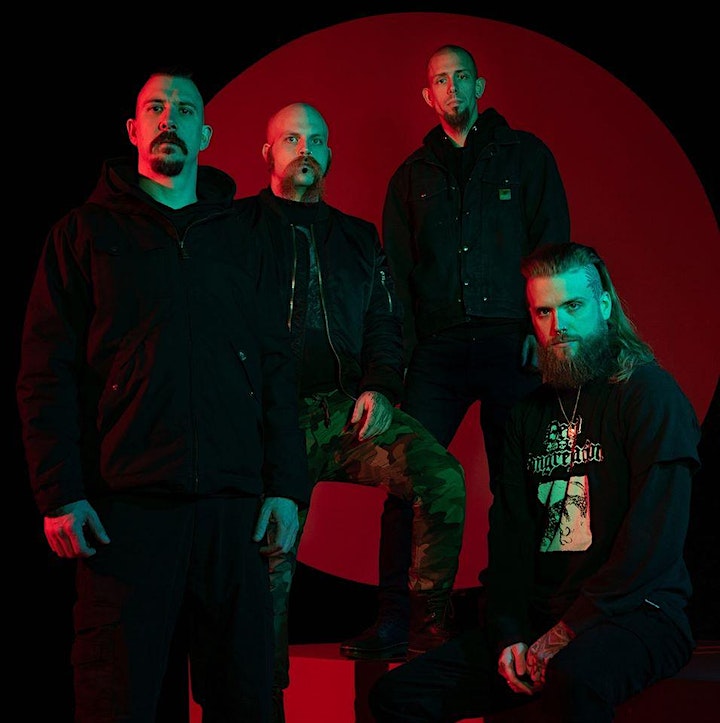